As the heading indicates, I’ve joined the company softball league. Our team is the Roswell All-Stars, and we play once a week at the Ranch. My first attempts at bat were pretty sad. At the first game, I managed to tip the ball, a nick really, and made it all the way to first base. Overcome with the excitement, I slid into the base and arose surrounded by a cloud of dust. The same cloud followed me at second, and again at third. Unfortunately, the third out was made as I made my way to home base, so I didn’t score that time. However, I did earn a nickname. . . Pigpen. Since that time, I’ve gotten much better at the whole batting thing. I can’t hit the ball out of the infield, or anything. But I am hitting the ball virtually every time I get up to the plate. You can see me scoring my first run below. 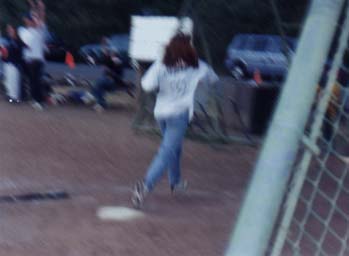 Steve is also on my team. He proclaims he hates having his picture taken, and yet, here he is hamming it up for the camera. 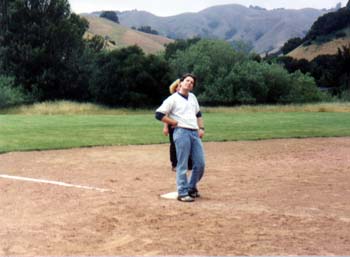 At the beginning of June, my parents droved across the country, seeing the sites of America. Although they missed the giant ball of twine, they did make it out to see me. The first day they were here, I made my first German meal: a wonderful sauerbraten that was enjoyed by all. We spent most of that day waiting for the meat to cook, talking, and unpacking the Jeep of all the wonderful stuff they brought out for me. I have a sofa for my apartment!!! The next day, we got up bright and early and drove out to the Petrified Redwood Forest in Calistoga. I did take a few pictures of the site, but wood-made-stone just doesn’t come across all that exciting on film. However, I did purchase a couple of pieces of the wood that are on display in my living room.

Driving back from Calistoga, we took a route that took us through wine country. We made several stops along the way, finally achieving success at the last winery of the day. There my parents purchased 2 cases of wine. I haven’t yet asked them if any of it was left when they got home.

Next, we went to an earthquake site at Tomales Bay. On this trail, you can actually see the fault line from the 1906 earthquake. There’s also a fence that shows just how far the earth moved that day. As you can see demonstrated by my dad, Steve, and I in the picture below, what used to be a continuous length of fence, shifted to separate locations. This happened instantaneously when the earthquake struck in 1906. 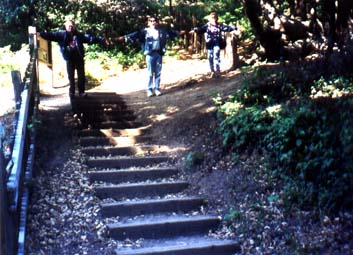 With the sun setting, we went to Tony’s for dinner after our long day. We took a moment for this family photo. 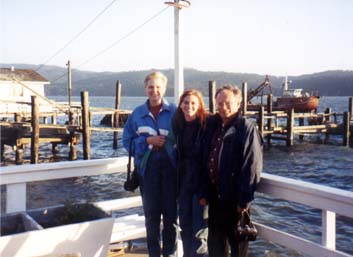 I took that Monday off of work so I could spend some time with the ‘rents. In the morning, my dad and I went to get our oil changed. Cool father/daughter stuff, ya know? We picked up Steve and went to the Ranch for lunch. My parents were awed at how beautiful it is up there. We hung around town that afternoon, doing a little shopping and then out to dinner. I had to be at work the next morning and my parents wanted to get an early start on their drive down to L.A., so we said good-bye shortly after dinner and they went back to their hotel. It was a great visit, and I think we all had a good time.

I’ve decided to start posting some of my favorite college pictures on my webpage, just to share the moments with you all again. For my first selection, I give you a picture from February 1993, freshman year. 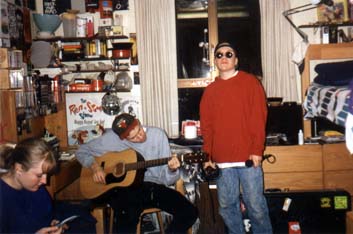 Stop back again to see another great photo op!